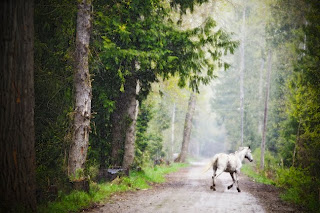 A couple of months ago on a blustery Tuesday I set out to find a “quiet” image. One that captured the melancholy I was feeling.

While coming into the town of Cataldo, along the Coeur d’ Alene River, I noticed a road that would take me on a section that I had not been down before.

As I turned onto this road I noticed a hauntingly beautiful white horse that had apparently found a way out of its pen and was heading straight for me. I immediately grabbed my Canon and started shooting.

The Mustang quickly did an about face and trotted away from me. I was obviously in the way of where she wanted to go. She would then turn and gain steam and move toward me again, hoping that I would take the hint and make way. This happened about three times before she saddled right up next to my vehicle and stared me down.

I blinked, as did my shutter, and drove off letting her pass.